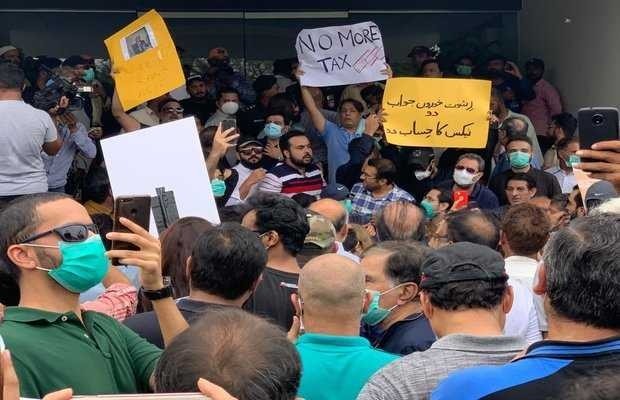 After heavy rains lashed Karachi last week, where more than 90 people lost their lives, over a 1000 lost their homes and several suffered business losses, the residents of Clifton and DHA in Karachi decided to carry out a ‘peaceful protest’ outside Cantonment Board Clifton (CBC)’s office. Khayaban-e-Rahat, on Monday over the “incompetence of the Defence Housing Authority and CBC in providing basic living conditions”.

However, what started as a peaceful protest soon turned into a violent one as agitation and frustration rose, with chants and slogans like “CEO Resign Kero” and ‘Go CBC Go’ being heard. The CBC had tactfully sealed their gates ahead of the protest scheduled by the residents of the area. The demonstrators breached into the premises of the CBC and tried to enter the office but were stopped by police.

Citizens demand action from CBC “we DONOT belong to any political party, this has nothing to do with KE or Sui Sout Koki hern Gas, our agenda is to make DHA AND CBCrealise that they are responsible for our huge loss due to this flooding in Defence.” #karachirains #karachisinks #cbc #clifton #dha #karachidiaries #protest

This is What Happened

As the sixth spell of monsoon rain lashed Karachi on Thursday, several areas of the city, notably the DHA, were flooded. Water entered a lot of houses in and people suffered insurmountable property damage.

However, despite it all, almost all of Karachi got rid of the rainwater in merely two days after the rain stopped, except for DHA and Clifton who were waiting for the DHA authorities and the CBC to take action, but in vain. With basements and streets flooded with rainwater, people were trapped inside their homes for over 5 days.

Video clips on social media showed how several houses were flooded with rainwater as the area’s drains failed to ensure water did not accumulate on the roads.

Saba Avenue DHA Phase 6 at the moment. It did not rain all day yesterday, it hasn't rained so far today either and there's still knee level water. DHA teams have clearly gone into hibernation because they're nowhere to be found. pic.twitter.com/yORWqX5d2r

There was no electricity, generators had given up and people were finding it hard to gain access to drinkable water.

There has been a complete break form of civil & civic infrastructure. CBC & DHA were nowhere to be found and there was no disaster management system for Karachi which is the 7th largest city in the world; a lot of people are blaming KE but they cannot switch the electricity on as the feeders are submerged in the water.

Cancer patients, children, patients with ALS, pregnant women, and so many more have been suffering for the past week; they couldn’t access hospitals or pharmacies for medicine and had no electricity for over 96 hours!

This was 26th street DHA Karachi, my neighborhood….this is why I was worried about my family, my father. What we have witnessed in Karachi today was apocalyptic in some ways. The true hurt & damage will be visible after the water recedes. Nothing but devastation. #KarachiRain pic.twitter.com/loWHBQ1rZC

This is DHA Phase 6 Karachi. What is happening in the low lying areas of KHI today is devastating yet once again.
Testing times for Karachiites yet again!
No doubt Allah tests those he loves the most.#KarachiRain #KarachiSinks #RainEmergency pic.twitter.com/MEBgRxWMCs

This led to angry protesters gathering at Do Talwar on Saturday night and chanting slogans against the DHA and other authorities for the poor infrastructure exposed by the rain and lengthy power outages caused by the heavy showers.

The protesters have demanded the chief executive officer of the CBC address them and listen to their grievances.

This is what one of the DHA residents had to say:

Our main purpose is to highlight the issue of a recent incident of flooding in this Rain.  We pay heavy taxes, we get bullied by blue uniform guards, and MAINLY WHAT HAS HAPPENED IN THIS RAIN. They have failed in every aspect. Please make sure this protest is not a fun game, it is not for people living outside defence, we DONOT belong to any political party, this has nothing to do with KE or Sui Southern Gas, our agenda is to make DHA AND CBC realise that they are responsible for our huge loss due to this flooding in Defence. Everyone can make banners and can fight for the right. Instead of one leader, we all are leaders in this protest. Therefore, please join and raise your voice against this corrupt system, we can’t suffer more.

Besides demanding an improvement in the sewerage system, the protestors also want that an audit of the flood relief tax collected by the CBC be shared with them and demand the board’s members to be held accountable for the lack of amenities provided to them over the years. They also demanded CBC to improve garbage collection in the area.

The organisers of the protest had requested everyone to “remain peaceful at all times, not harm or hurt anyone, not damage any property and do not harm any plants or animals”. However, the protest turned violent over time as emotions took over. 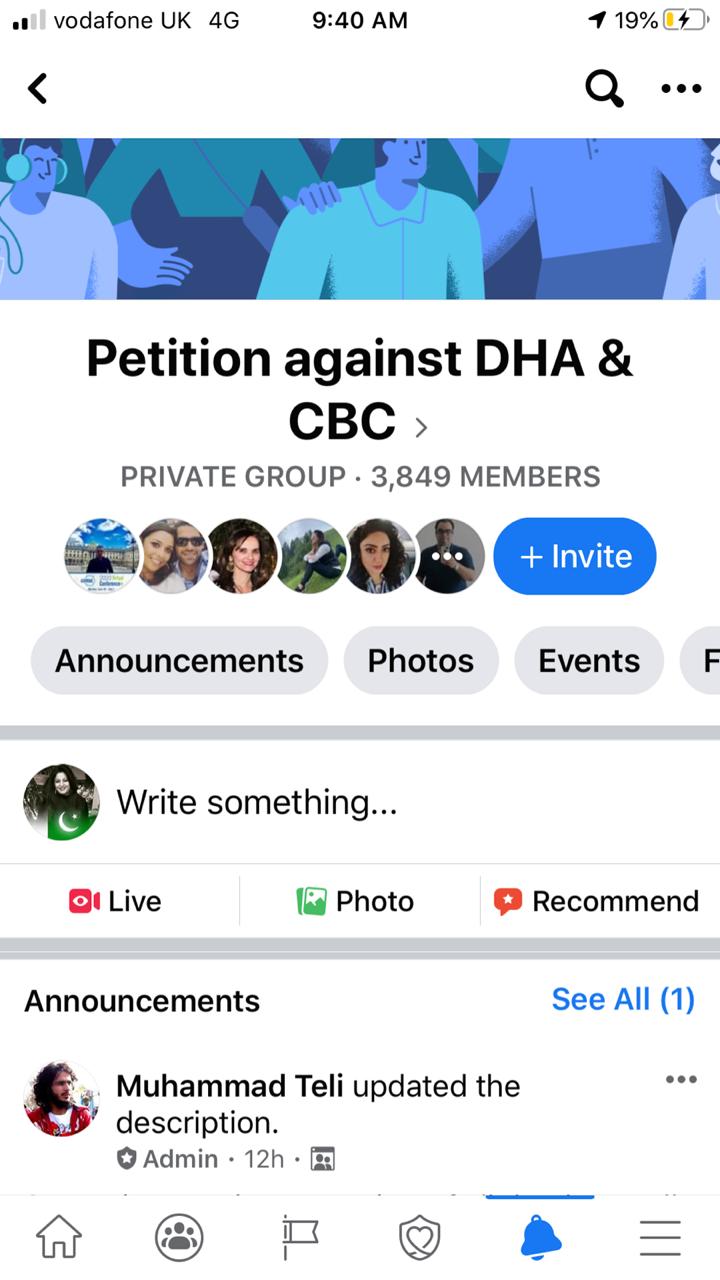 The facebook protest group admins had clarified that neither do they “promote, recommend, encourage or incite any sort of violence, nor shall they be held accountable or responsible for any person’s personal choices or acts in the Peaceful Protest.”

The organisers even clarified that they are not affiliated with any political party.

A total of 22 demands have been put forward by the residents of DHA, which includes the return of tax money taken from them under the “Development Charges” head.

Apparently, a bigger protest will be happening on September 3rd at 12.30pm outside the DHA’s Phase 1 office.

Great respect to these wonderful citizens who have gathered for a peaceful protest against CBC & DHA authorities. Senior citizens, men, women & even children. Incompetence can NO longer be accepted. #Karachi #KarachiRain #DHAKARACHI pic.twitter.com/2NRQT4q1Kp

What is happening now

The protest is still ongoing.  One of the residents of the area believes they need to meet the Corps 5 Commander and file a petition needs to be addressed to the Chief Army Staff.

Fortunately, our voice has been heard and I was contacted by the Corps HQ and have just had a productive meeting with them. They genuinely want to resolve all issues of DHA residents in a pragmatic way. As a first step may I suggest that we meet the Corps 5 Commander, Karachi and have a frank proactive discussion with him, which I can arrange soon. We can then plan out our next strategy, accordingly. Our objective is to get their attention towards resolution of our problems and ensure that the future is better.

I should point out that DHA (which does not legally exist as an authority since it comes under CBC) is controlled directly by the Corps Commander. This disaster there is all on him.

The CBC – which was also awol this entire time – is controlled by Brigadiers/ Maj Gen, which is why it can’t even exert itself on DHA.

One should def hold elected reps to account but let’s also understand the structural issues caused by an unaccountable system.

Demand the sacking of the Administrators id the DHA and CBC who are serving Brigadiers as well as Commander 5 Corps who is a serving three-star General.

A petition needs to be addressed to the Chief Army Staff. PTI have held the National and Provincial Assembly seats of this area since 2013, starting with Arif Alvi as MNA and Samar Ali Khan as MPA.  PTI retained both seats in 2018.  They need to be held accountable as well.

This is a developing story

Stay tuned for more updates on all the latest events and happenings!