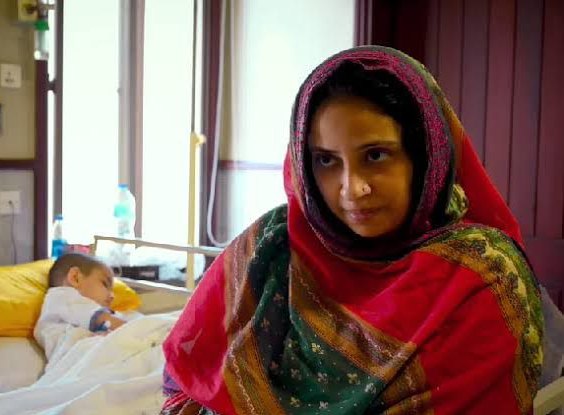 Ocean Mall has sent Rs 50 Crore defamation notice to Aman’s parents, who got injured and lost his foot due to a “faulty” escalator.

On the 20th of March, a tragic incident occurred in Karachi’s private shopping mall – a three-year-old boy lost his foot after it got stuck in an elevator. The parents appeared on the media after the incident and raised their voices against the authorities. They have now received a notice for defaming the mall for Rs.50  crores.

In a clip that first began circulating online, the child’s mother narrated the tragedy that occurred with their child. They went to Ocean Mall so their child could play and have a good time in the playing area but left for ICU devastated. The parents allege that the escalator was faulty – the emergency stop button was not working, and neither did the security know how to stop the escalator. They had to pull out their child’s foot with force in the end.

The graphic photos of the child’s foot online show that the foot has been completely damaged, and the bones were exposed.

People have been protesting against the mall owners on two talwar to highlight the incident and how it is being dealt with.

Ocean Mall has warned them of serious consequences if they continue to highlight the incident.#BanOceanMall #OCEANMALLBan pic.twitter.com/AfyhG1alZB

Ocean mall has uploaded a video on its social media pages in response to the allegations. Ocean Mall’s Head of Operations, Mr. Mohammad Salman, has shed light on what transpired.

The video’s caption read, “Without a doubt, the incident was devastating, and we have done everything we can to assist the family and child with medical expenses and other necessities. We urge the general public to approach the matter with an open mind.”

Many on social media are condemning the incident. The hashtag #BanOceanMall has been trending on and off on social media with shoppers and mall goers furious with what had escalated.

Man Commits Suicide in Karachi at Lucky One Mall. Here’s What You Can Do To Help People in Distress. Read the full story here:

A 28-year-old man committed suicide in Karachi’s LuckyOne Mall located at Rashid Minhas Road. The man found in a pool of blood by shoppers was rushed to a nearby medical facility. However, he succumbed to his fall and passed away at a healthcare center in Gulshan-e-Iqbal Block IV. As per CCTV footage, the man was on the mall’s third floor when he attempted to take his life.  The body was moved to the Abbasi Shaheed Hospital for medical and legal formalities.

Man Commits Suicide in Karachi at Lucky One Mall, Here’s What You Can Do To Help People in Distress