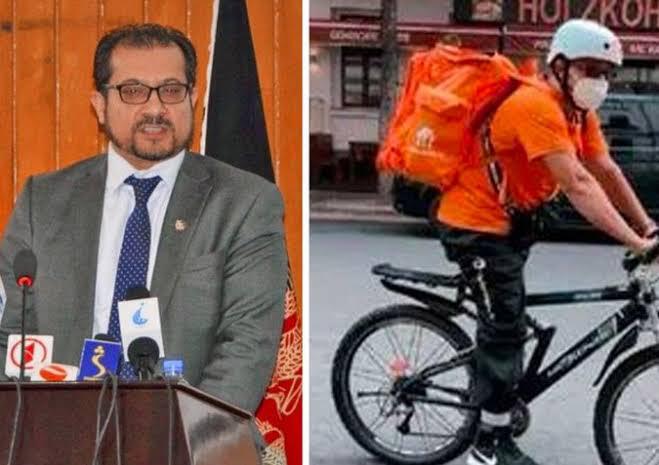 In a recent turn of events, a former Afghan minister, Syed Ahmad Shah Saada, was spotted in Germany “delivering pizza” a year later after he left his position in his home country.

According to India Today, in a picture, we see the former Afghanistan information minister dressed in orange-coloured clothes with a delivery bag on his back cycling to deliver food in Leipzig, Saxony. Reportedly, the picture was captured by a German journalist who went viral very quickly on social media.

The journalist took it to a microblogging site to announce the news. “A few days ago, I met a man who claimed to have been the Afghan communications minister for two years ago. I asked what he was doing in Leipzig. “I’m driving out of Essen for Lieferando” [the man told the jounalist]”.”

Sky News Arabia contacted Saadat to confirm if he’s currently working in Germany for Lieferando that provides food delivery services. He admitted that he is indeed present in Germany working as a delivery boy.

Malala Expresses Concern for Women in Afghanistan, Says She is Still Recovering from Just One Bullet. Read the full story here:

Nobel Laureate Malala Yousufzai expressed her concern for the women in Afghanistan. She narrated her struggle nine years ago due to the group which currently governs Afghanistan. Malala said she was in Boston for facial paralysis surgery after numerous surgeries in the past nine years in a blog post. This was when she observed the developments in Afghanistan after the U.S. withdrew its troops from the country after 20 years.